Contested Zones are territories which can be conquered and owned by one of the four civilisations. They are located in western Africa and in between Egypt and Persia and in between Persia and Rome and in northern Asia and between China and Persia. The owner of a Contested Zone (or CZ) can be recognized by the color of the CZ. For each of the four civilisations, CZ's under their control will have a similar color to the civilisation's color on the map. If none of the civilisations own a CZ, then it will be colored green.

As a civilization you will of course want to expand your territory, you can do this by attacking a Contested Zone in a neutral region.

There are certain requirements to taking over a Contested Zone

- Fights happen between 6PM to 9PM (PST) Pacific Standard time on weekdays, declarations must be made 1 hour in advance of an attack.

-Fights happen between 10AM to 1PM (PST) Pacific Standard time on weekends.

- Your guild can only declare on one Contested Zone a day.

- You can only declare on a contested zone that your civ doesnt already possess and it must be touching your civ or another CZ that your civ has possession of.

The fight itself is against a variation of troops, between 5k to 17k enemy troops. Units don't reset if you lose a wave against an NPC owned Contested Zone. A green zone may also be empty (no troops). This would result in a free Contested Zone.

- 3 heroes enter in the battle field at a time, the rest are put in queue. When hero and his army dies next one in the line enters the battlefield.

Battle ends once the winning side kills all of the opposing army or when timer runs out.

A contested Zone can be won in one of two ways, either destroying the CZ center building, or by decimating all of the opposing troops and heroes within before the time runs out. Units attacking the Contested Zone center will attack it for 1 damage per unit.

A troop stack of 600 units will damage the CZ center for 600 damage regardless of its tier class or troop type. Siege weaponry are the exception to this rule, and Trebuchet troop type do extra damage to buildings.

Aside from the central building there are 4 NPC controlled Archer Towers which attack enemy units.

As the game proceeds you will soon have to fight against the other civilizations over CZ control. This differs slightly from the PvE CZ wars.

- Defending civilization can garrison up to 15 heroes to defend the CZ city.

- The actual battle will be 3vs3

- Rest of the heroes wait in queue

- Each CZ has 4 Steeples that act like another CZ with Flag and Towers. Your civ should have possession of these steeples as well as the CZ. The steeples give you extra resources. They can be defended by the enemy civ. This is a good way for smaller guild members to participate and contribute to CZ.

Before the War (outside of the City) 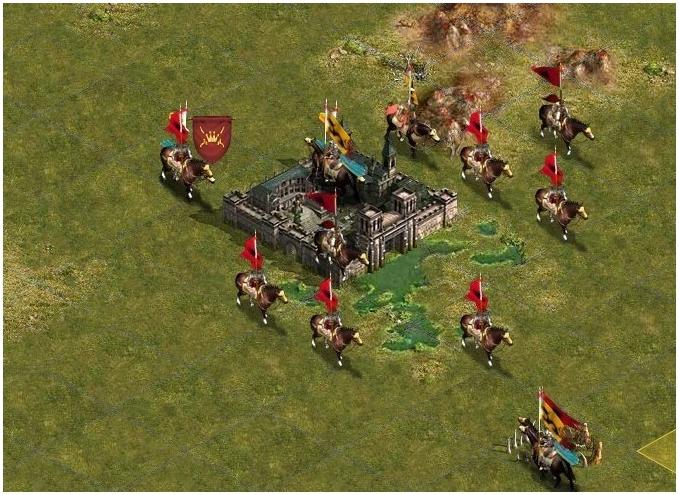 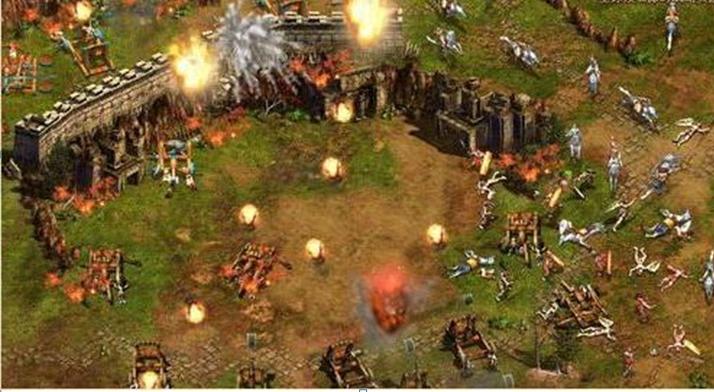 10 minutes after the arrival of the first troops, the attack starts.

The Guild that’s declaring should have at least 10 members or more, and total fame of 150,000 or more. Each Guild can only declare war on one CZ. There is a two hour countdown after the declaration. 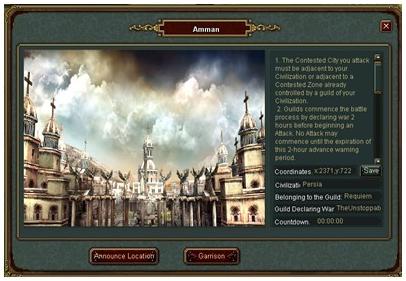 After successfully declaring the war and waiting for 2 hours, the two sides can prepare at the City. Guilds can declare war every day, but the war is open only on Tuesday, Thursday, and Saturday.

In the war, the attacking side needs to either kill all the defending troops or knock down all the flags within the required time to be successful. Defending Side need to make sure not all of its troops died or not all of the flags are knocked down. If at the end of the battle, the two sides break even, then the defending side wins.

The rewards for taking over a region are as follows:

- A new province added to your civilisation

- A small amount of glory and carnage to all guild members.

- A chance at aquiring the items listed on the CZ in your guild shop. (Which you can buy with guild coins)

After declaration is successful, there will be a two hour countdown, then the attacking side can start attack. 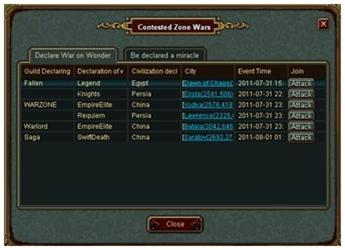 3. Click on the own country’s CZ city that is closest to the City and click to start expedition. The System will choose the closest city by default.

4. Bring enough food and troops for the war and click on “expedition”, then your hero and troops will be immediately transferred to somewhere close to the City. 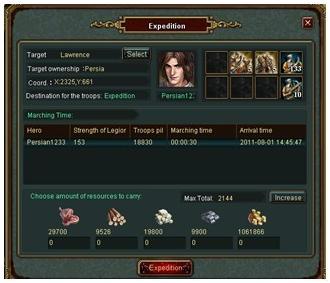 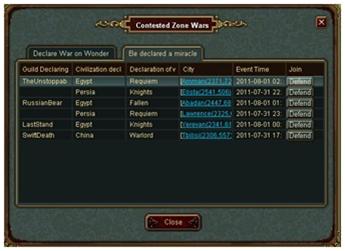 3. Click on the hero, bring enough food and troops, and click on the “Expedition” button. Your troops will be immediately move to somewhere close to the City that is the capital of CZ zone. 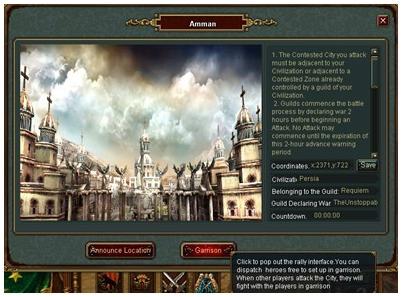 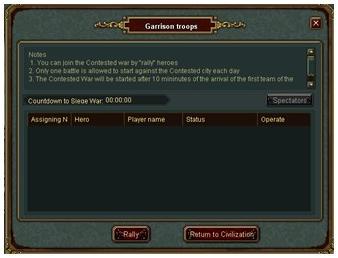 6. Choose the troops to help with defending.

7. Enter the CZ and wait for the attacking side to start attack.

After the CZ War starts, if the attacking side rallies at the CZ Zone City, then the system will have a reminder of countdown for 10 minutes. During this time, the Defending Time can rally troops within the City. After the countdown is over, the battle starts. Defending Side need to make sure not all of its troops died or not all of the flags are knocked down. The attacking side can attack again if the CZ War time is not over, and the defending side will need to keep defending until the time ended.

Retrieved from "https://mow.fandom.com/wiki/Contested_Zone?oldid=8024"
Community content is available under CC-BY-SA unless otherwise noted.