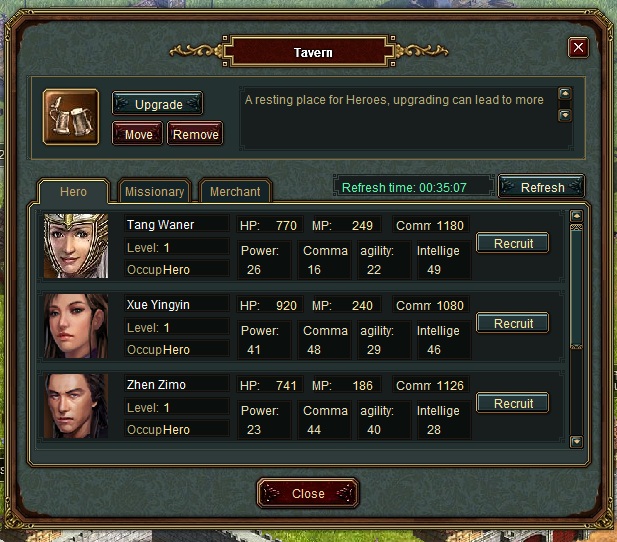 When you start, a good Ministry Of War hero will be mandatory.

You can find the heroes in the Tavern. It renews itself every hour. In addition, the list will refresh when you upgrade the level of the building, or if you use a Will Solicit Token.

The value varies according to the color of the hero. 1 to 2.5 stat points are given by the system each level your hero jumps. You can use the one you like.

White Heroes: * Each level of the system jumps by 1 stat points will be awarded. And use this score in any of the unit stat.

Green Heroes: ** Each level jumps 1.5 stat points will be awarded by the system. And use this score in any of the unit stat.

Blue Heroes: *** Each level jumps 2 stat points will be awarded by the system. And any one of these units can use the

Purple heroes: **** Each level jumps 2.5 stat points will be awarded by the system. And use this score in any of the unit stat.==

White and green heroes probably shouldn't even be recruited by you unless you have some purples to level and just need a lower grade green hero to do a plunder or small lair.

Every point added in this stat increase attack damage by a base of X, and serves as a multiplier for weapon damage.This stat allows certain skills to be learned and upgraded.

Some skills need this stat to be learned the maximum being 415 currently. List: Sprint, Shock Assault, Poison, Blitz.

Every point in this stat will give an extra two capacity toward upper unit limit. After 1000 points, it becomes an increment of 1 instead of 2. This skill allows the ability to learn some skills. It is generally not high, as the heroes with a concentration in this stat get their butts kicked by the same level hero with a physique or power concentrate.

Some skills need this stat to be learned the maximum being 415 currently. List: Trumpet, Overwhelming Forces, Stampede, Focus.

This skill increases base defense and health by an increment, defense by .26 every point, and health by 3. This also serves as a multiplier for hero defense gained from armor. The total defense of a hero is given, approximately with a very low margin of error, by this equation:

Some skills need this stat to be learned the maximum being 415 currently. List: Quicksand, Phalanx, Sword Breaker, Assassin Vine.

Intelligence increases energy/mana by 2 points each point added to this stat, and increases effectiveness with some spells. Damage can be shown by the hero's Internal Affairs *(shown in the thousands against units/mobs only)

Some skills need this stat to be learned the maximum being 415 currently. List: Mud Trap, Focused Strike, Pyromania, Flood.

Note- No idea what the person means by jump in stat points. -Beard

Retrieved from "https://mow.fandom.com/wiki/Hero_Stats?oldid=7657"
Community content is available under CC-BY-SA unless otherwise noted.